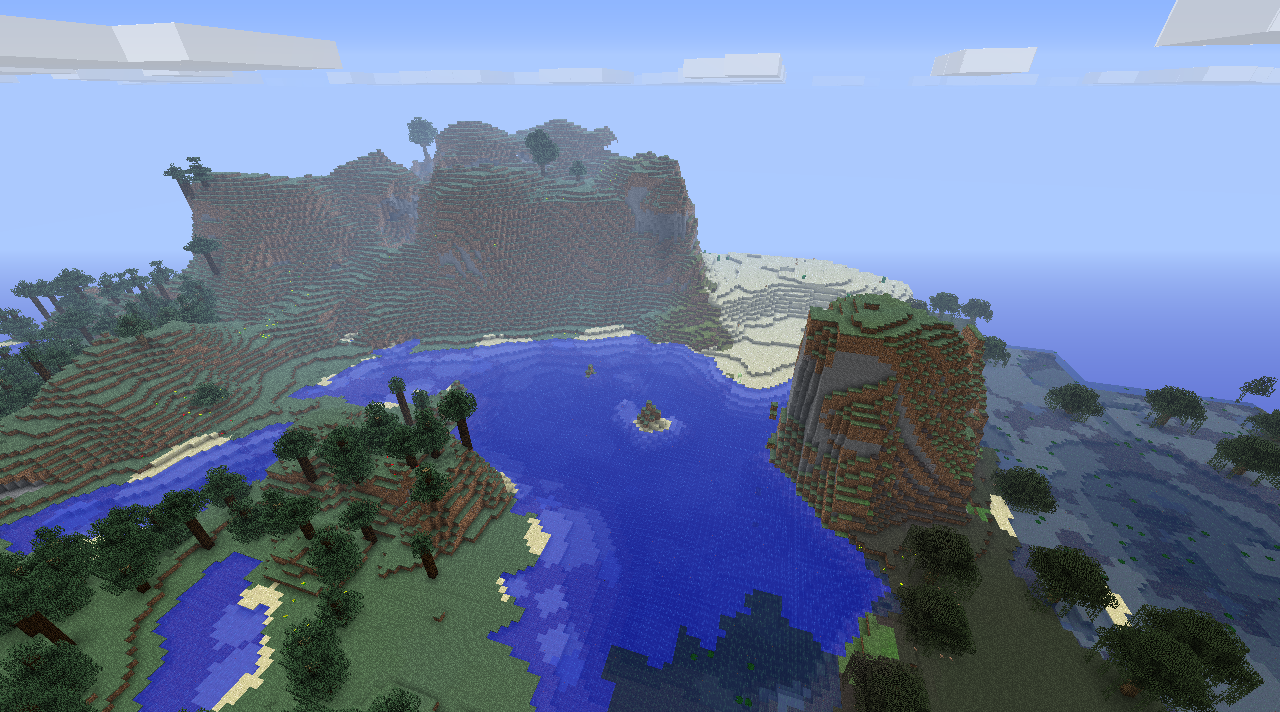 You spawn in a swamp, with a pine forest, desert, and a very cool mountain range with many cool features nearby. Your spawn is right under the shadow of a little (in comparison) mountain with a very short cave in it. This cave has a fair amount coal in it, great for starters, and may be ideal for a temporary hidy-hole. Within the mountains, you may find a lot of strange indents, floating islands, and weird-shaped trees. And caves. Within one of the caves (a very short one at that) there is a dungeon! I don't doubt there are more in this area. In the desert, there is a second dungeon, which is visible clearly from the surface. This dungeon is such a short way into the desert. Another surface dungeon is also along the border between the swamp and desert. From this one, it should be connected to a cave that leads to another dungeon... I know, this is getting a little ridiculous. There's also a fifth dungeon a little bit into the pine forest. There are also a great many ravines with things in them on this map that may be of particular interest to you... but there are so many I'm not even going to talk much about them. Also, just over the pond from the spawn island to the pine forest, there is an abandoned mineshaft, with melon seeds! Dig down in spiral fashion at x: -246, z: 173, and you should end up on the ledge of the ravine/mineshaft. I also do know that diamonds are not too far into the smaller ravine that intersects it. The one thing that this map is missing for me, is a village. However, there are some cool villages although they're a far ways away from the spawn. And if you ever decide to search for a stronghold, the one on this map should be just off the coast of the grassland that borders the desert. The thing that's special about this stronghold is it has four dungeons and an abandoned mineshaft intersecting it. Overall, this seed has many great features, like the extremely high amount of dungeons. When I first discovered this seed, I just expected it to have an amazing landscape (which was apparent) and maybe a couple dungeons, but I didn't think it would have so many so close to the surface and spawn. Great, great seed, I probably will add more to this seed soon, it's just ridiculous. Also, it does work in 1.1, but the dungeon in the mountains will be gone, and the mountains will be much less mountainous. I'd recommend generating the area around the spawn in 1.0. It generates the same in 11w49a, except for the snow. Also, much to my surprise, much of it is the same in 1.2-1.2.4! Just follow the coordinates below for the area around the spawn. A couple of the dungeons are still in the same spot, but the main difference is that biomes are different. The desert and swamp are now a plains biome with a big village! But most of all, the mountain biome is a lot bigger. It's replaced the taiga, and it's now HUGE! The same giant mountain is still there even! Oh and there's a jungle behind the village. I might be making a page for this seed in 1.2, but if someone could do it for me that would be great.

Play this seed in Minecraft ›

Get your own Minecraft server and play this seed with your friends. 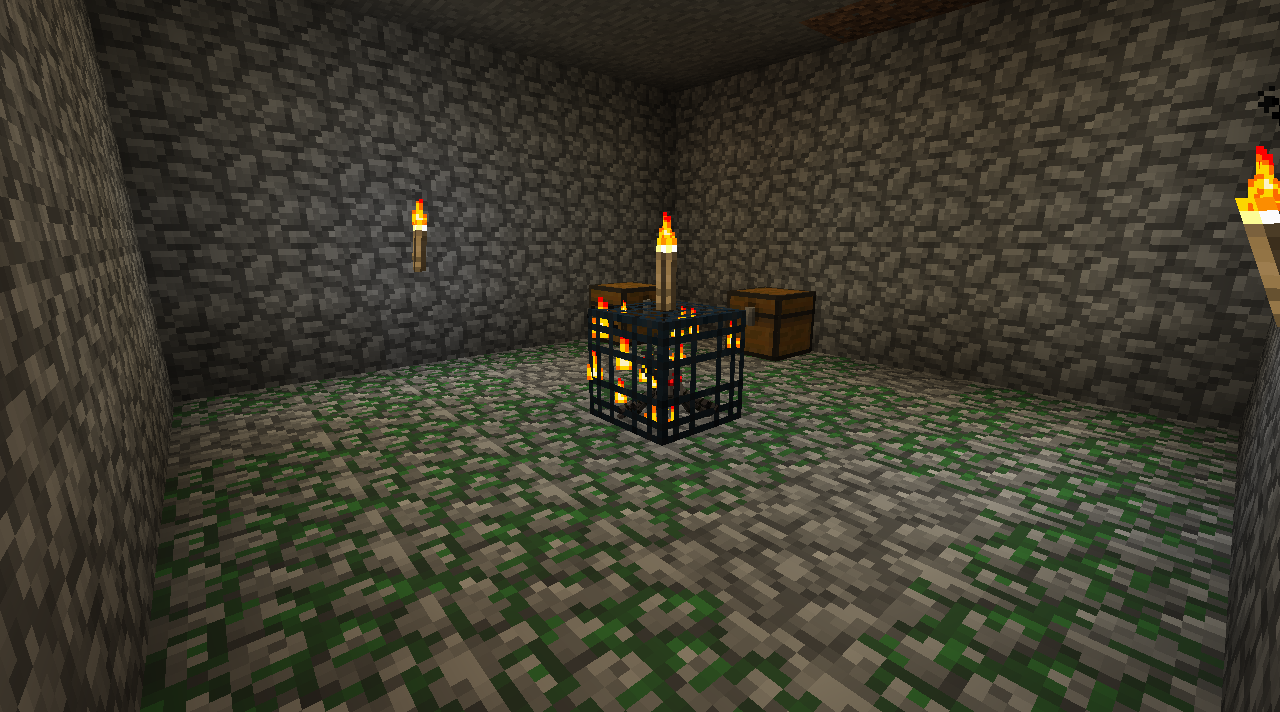 A dungeon! Within a short cave in the mountains, this dungeon is conveniently close to the spawn. 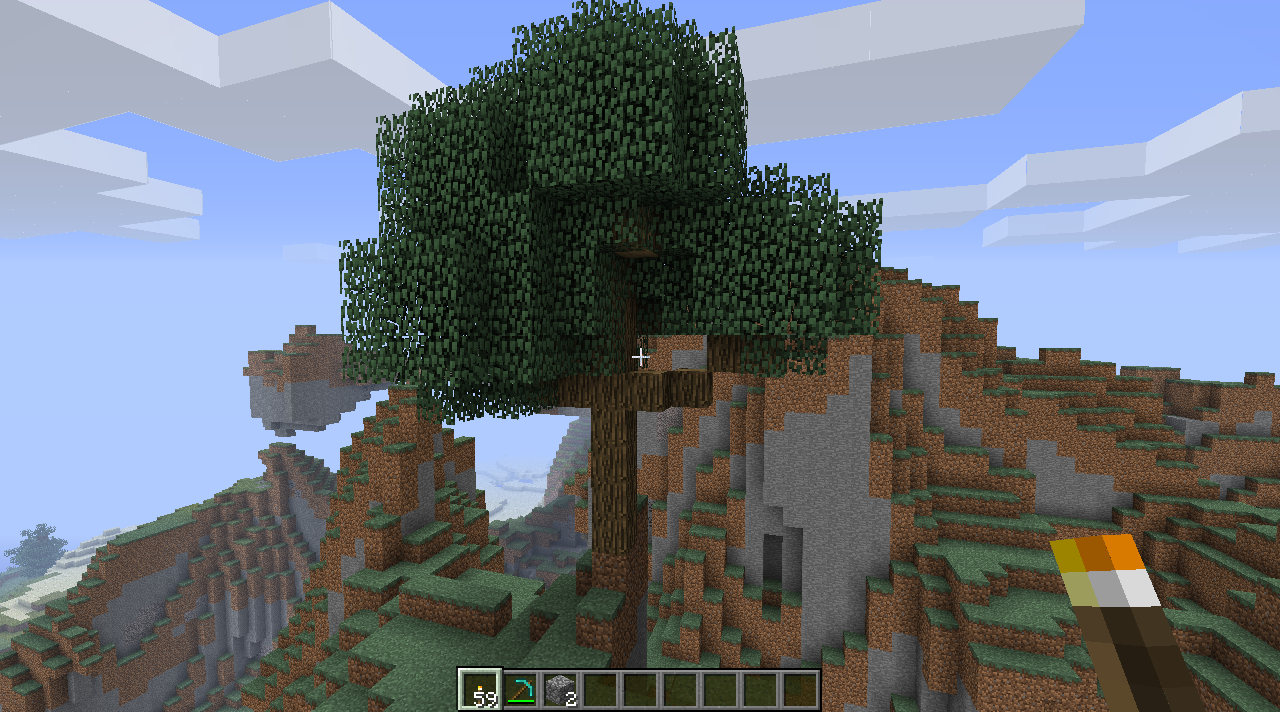 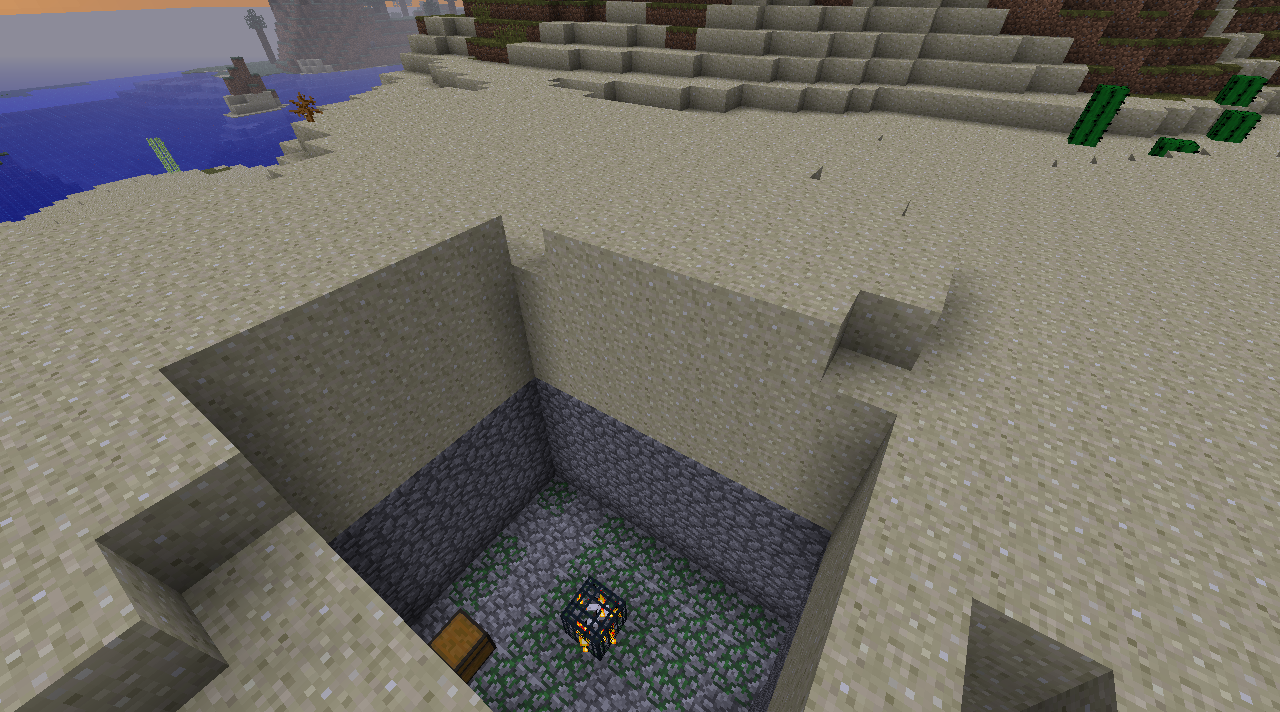 Two surface dungeons! And one underground one. We shall refer to the closest surface dungeon as dungeon #1. And the farther surface dungeon as dungeon #2. Lastly, the underground dungeon will be called dungeon #3. The coordinates are also numbered as so. However, the #3 coordinates are not given. So you will have to follow my directions for #3. Both surface dungeons are a short way from the borderline between the swamp and desert. From dungeon #2, once you have cleared the sand out of it, there should be a hole on the side that is in the ceiling of a cave. Find a way down here. It should be a fairly wide one, with a circular room directly ahead. From this room, there should be a cave entrance right in the direct middle. This cave should be pretty straight forward. It intersects with a the end of a huge ravine, but it is not cut in half. Avoid the ravine, we're looking for a dungeon. Go straight down the cave, and it should lead to dungeon #3 shortly before encountering a 3-way fork. Tow of these will lead to a dead end. The third will intersect with the circular room. 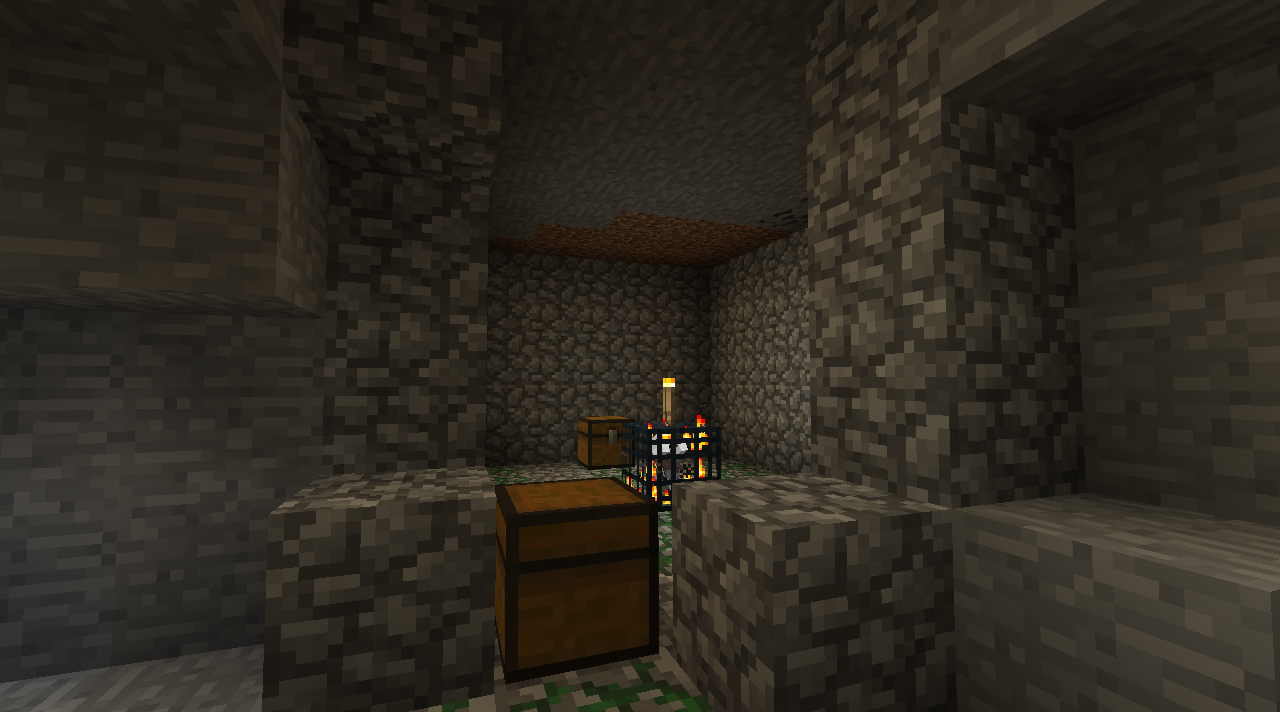 A fifth dungeon! This is ridiculous. A short ways into the pine forest, you will come across a large cave with many openings. Go straight, then you will find a small drop into a circular room. From the ledge, go down the cave that is on the far right. You should find a waterfall. From the waterfall, go left and it should be straight ahead.

Aquanite1470I have been looking for dungeon heaven, and I have found it. Thanks! 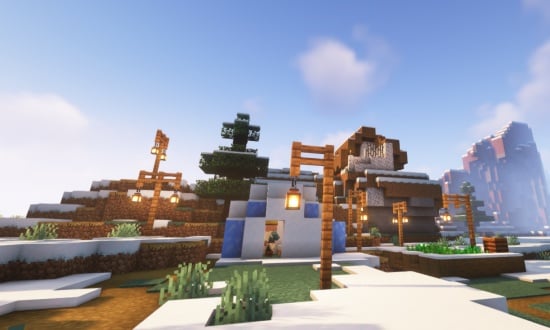 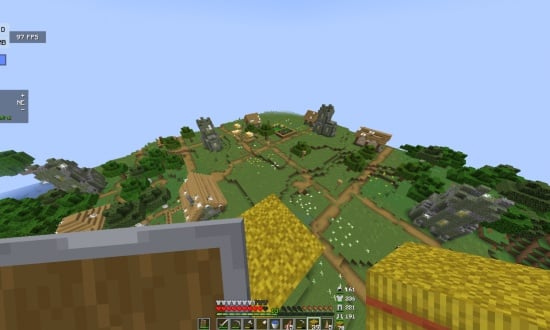 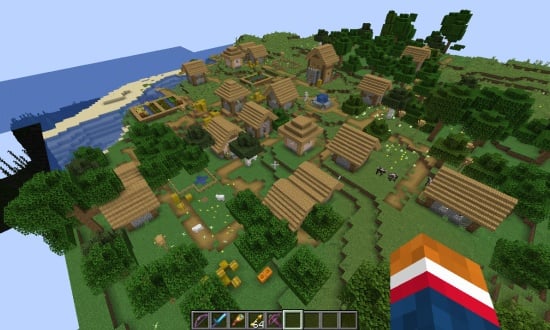 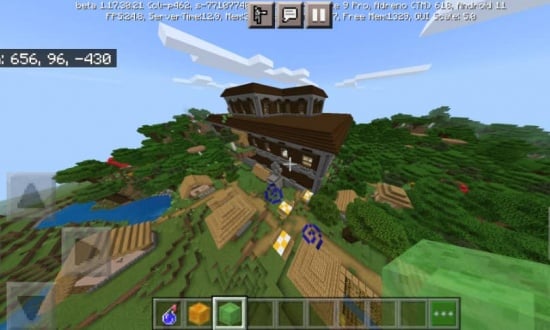 Spawn near village with woodland mansion 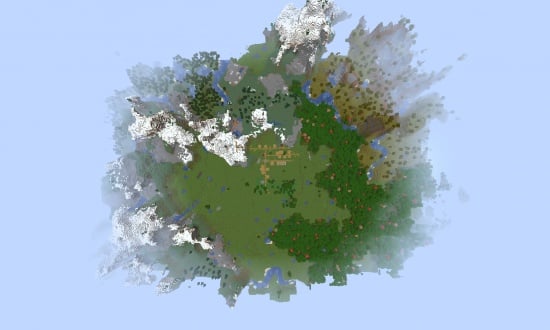 Sick seed, spawns you next to a village with 2 blacksmiths and around a bunch of biomes 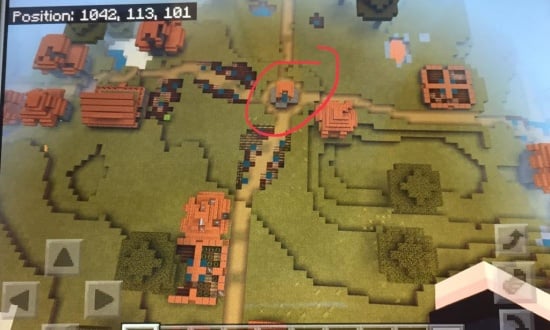 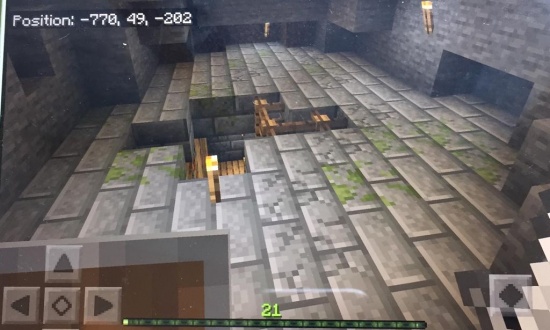 Stronghold right below desert village which is near a beach 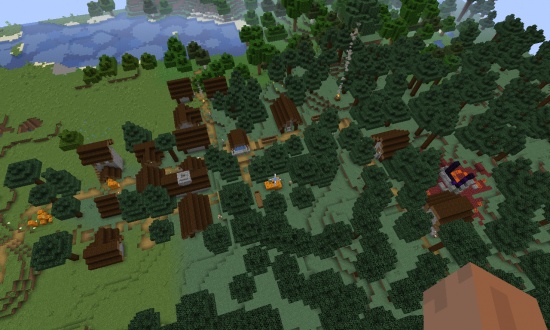 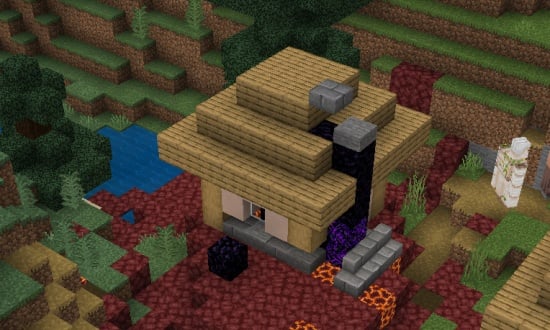